Skip to content
It’s a new season and as always the expectations are huge ! Andre Villas Boas working with a team identical to the one under Carlo Ancelotti , has made clear that he intends to win and win big . Oriol Romeu and Romelu Lukaku will be great additions to the squad and if Modric makes the move chelsea will definitely be right up among the top three on paper . But , games , seasons and trophies are not won on paper ( Real Madrid , the biggest examples of that statement ) .

The season opener against Stoke city has just ended 0-0 but that’s hardly any cause for worry for AVB . On the contrary ,
he’ll find a lot of positives emerging out of this one. The largest of which being the return to form of Fernando Torres . Yes . He is at chelsea , incase you forgot ! Looking focused , having fun , dementing the stoke defenders and coming close to scoring on a number of occassions. Ramires too looked sharp and the little we saw of Drogba indicated he was hungry for goals and ready to go for the season ahead . The other positive came  in the last 15 minutes or so when we saw what many pundits and experts said would not happen , actually happened . That strike trio of chelsea Anelka , Torres and Drogba playing in the same squad and blending in seamlessly ! 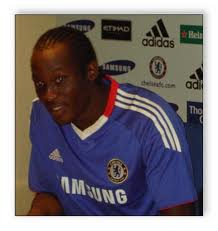 A poor first half was followed by a spirited second . AVB’s half time talk clearly worked and the final score justified the game not because Stoke played exceedingly well but because chelsea had two very contrasting halves . That being said , Stoke did put in a good first half performance but chelsea were just too good for them in the second .

AVB , just to make a point to the other teams , put out the most attacking team he can !

Mr AVB , If you are reading this , Here’s what I would love to see !